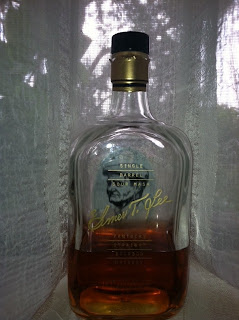 Born in 1919, Elmer T. Lee is one of only two living men to have their name on a bottle of bourbon (the other being Jimmy Russell, master distiller at Wild Turkey).  At the age of 93, rumor has it that Mr. Lee still selects the barrels that fill the bottles bearing his name.  Read more about Mr. Lee here.

Taste - Great spice from the rye.  Clover,cinnamon, honey, and a bit of oak.  In my short time with bourbon, this whiskey has the most perfect balance of sweet & spicy that I have tasted.

Finish - The spice sticks around for a good minute or two.  Yes, that is a good thing.  I don't like it when the spice leaves the party too soon.

95/100 - The highest score I have given so far.  At $26 you really cannot beat this.  I've had whiskey at twice the price that are not nearly as flavorful.  I won't name names.
I'd love to see Buffalo Trace come up with a barrel strength version of this.

Find it here or here if you live in Cali.  If you live east of the Mighty Miss try The Party Source.
Cheers!
Posted by Drink American at 4:52 PM No comments: 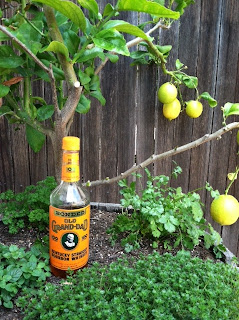 Produced by Beam Inc, there are 3 versions of OGD - 86 proof, 100 proof BIB, and 114 proof.
This review is for the 100 proof BIB (bottled in bond).  Old Grand Dad is a reference to Basil Hayden who began distilling a high rye grain bourbon in the late 1700's, and this OGD is allegedly a similar recipe.

Bottled in Bond is (from Wikipedia, as I would have nothing to add)


Bottled in bond refers to American-made spirit that has been aged and bottled according to a set of legal regulations contained in the United States government's Standards of Identity for Distilled Spirits (27 C.F.R. 5.21, et. seq.), as originally laid out in the Bottled-in-Bond Act of 1897,
To be labeled as "Bottled-in-Bond" or "Bonded," the spirit must be the product of one distillation season and one distiller at one distillery. It must have been stored (i.e., aged) in a federally bonded warehouseunder U.S. government supervision for at least four years and bottled at 100 (U.S.) proof (50% alcohol by volume). The bottled product's label must identify the distillery (by DSP number) where it was distilled and, if different, where it was bottled.

Flavor - If I were asked "what does bourbon TASTE like" or "give me a pour of something that tastes like bourbon in it's most raw form", I would pour this.  The taste is very bold, very spicy and somewhat woody.  Fantastic balance between the sweetness of the corn and the peppery quality of the rye.

Score - 88 - Highly recommended, especially considering the $20 price.  If you are new to American whiskey, try this next.
Posted by Drink American at 5:12 PM 1 comment: